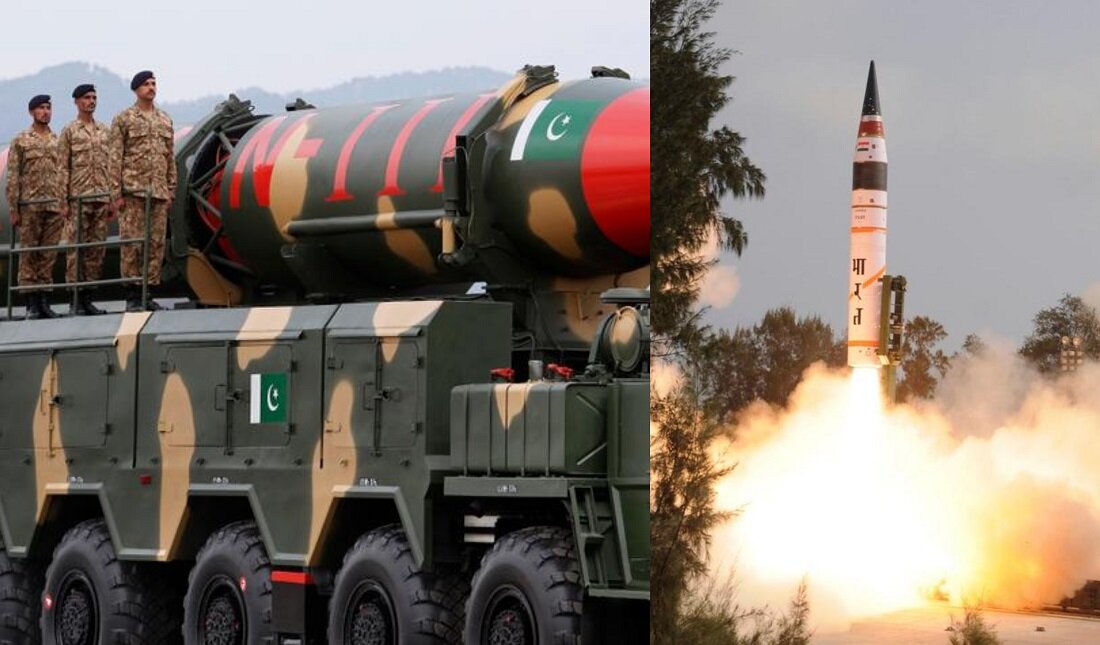 India and Pakistan are the two conflicted countries in the world with their disputes over Kashmir causing several wars between them.

What is the Matter between them?

The two countries have an issue on the matter of Kashmir occupation. Pakistan believes that under the 1947 act it was their hold. However, India has occupied a larger region of Kashmir under military force.

Why the Issue Peaked up now?

The issue peaked up with India and Pakistan with little war on the border in February 2019 leading to the resolving of the Article 370 and 35A by India. The two countries have passed several comments on the possibility of nuclear war. Read more: Article 370: A New Attack on Kashmir

What were Pakistan Remarks?

In UNGA, last week the Prime Minister of Pakistan “Imran Khan” spoke about the possibility of war saying,

“If a conventional war starts between the two countries, anything could happen. But supposing a country seven times smaller than its neighbor is faced with the choice: either you surrender, or you fight for your freedom till death, what will we do? I ask myself these questions. We will fight … and when a nuclear-armed country fights to the end, it will have consequences far beyond the borders,”

What are India Remarks on Nuclear war?

India has a no first-strike policy and they firmly believe that a response of nuclear attack will be the result of retaliation if Pakistan takes a step. An expected war was about to start in February 2019 but Pakistan returned their downed pilot named as Abhinandan.

What will be the Consequences of War?

Scientists at Rutgers University predicted what could happen if the two powers declared war. Their research was published in a paper on Wednesday October 02, 2019. According to the research, the nuclear war will result in a deadly war with a terrible genocide and fatal cooling. 100 million immediate deaths are expected to occur as a result of the war. Read more: This is What Islam and Hadiths say about Ghazwa-e-Hind

What will be the Scenario of the war?

The paper discussed the year 2025, the militants from Kashmir entering New Delhi, capital of India, killing the majority of the leaders of the nation. As a result, the Indian government sent their military troops to the Kashmir region occupied by Pakistan as retaliation.

Pakistan standing on a firm independent stand sent their army personals to start a nuclear attack resulting in worldwide starvation and zero sunlight for a decade or more.

Are the Nations prepared in terms of Nuclear Weapons?

Since the tension between the two countries is a long-continued issue, the two countries have almost 150 nuclear arsenals and the amount has expected to reach more than 200 by 2025. Alan Robock, a professor in environmental sciences at Rutgers University who co-authored the paper said,

“Unfortunately it’s timely because India and Pakistan remain in conflict over Kashmir, and every month or so you can read about people dying along the border.”

Why Nuclear war will be so disastrous?

According to statistics collected through the urban areas that can be affected and the current population of both the states, a total of 125 million people can die within minutes of the nations use their complete weapons in full amount. Because the 6 years long World War 2 resulted in 75 – 80 million causalities.

Is it more Deadly than the bombing in Japan?

The nuclear war at the extreme will result in the usage of 100 kilotons of weapons that is almost six times greater, powerful and deadly than the bombing on Hiroshima and Nagasaki.

Why the Nuclear bomb is so deadly?

A nuclear bomb dropped will kill around 2 million people and 1.5 Million people will be injured. But the resulting firestorm will be quite ragging resulting in the majority of the deaths.

Which country will suffer more?

According to the research paper,

“India would suffer two to three times more fatalities and casualties than Pakistan because, in our scenario, Pakistan uses more weapons than India and because India has a much larger population and more densely populated cities.”

Why will Nuclear war result in an Ice age?

When the nuclear weapons will be disposed of, the resulting firestorms will produce approximately 16 million to 36 million tons of soot or black carbon in the atmosphere which will be spreaded worldwide within weeks.

What will Soot do in the atmosphere?

The soot spread in the atmosphere worldwide will result in the absorption of solar radiation or sunlight, resulting in heating up the atmosphere and increasing smoke rise.

How the temperature of the world be cooled down?

The soot in the atmosphere will cause the sunlight reaching the Earth to decline up to 20% to 35%. This decrease causes the cooling of the Earth surface by 3.6 to 9 degrees Fahrenheit or 2 to 5 degrees Celsius. The considerable reduction in precipitation is noted to be 15% to 30%.

Why will the world starve due to nuclear war?

Due to the climate change, the cultivation of crops and production of food will be highly affected. It will result in a 100 million people death globally out of starvation or hunger.

What are the final remarks of the researchers?

The research paper lent more evidence to support the 2017 UN Treaty on the Prohibition of Nuclear Weapons. Robock told AFP that,

“I hope our work will make people realize you can’t use nuclear weapons, they are weapons of mass genocide,”

Johann Chacko, a columnist for Quartz India and doctoral student at SOAS in London, said,

“It helps the global community evaluate the cost of nuclear war for everyone, not just the combatant nations, particularly its climatic impacts. There’s very little in the history of Indo-Pakistan kinetic conflict to suggest that leadership on either side would continue escalating until they annihilated the other.”

What are AFP remarks?

“Two countries with smaller numbers of nuclear weapons on the other side of the world still threaten the planet, so it’s not something we can ignore.”

A new trend of setting up street library

A Woman and her Child died due to

Indian Minister is working on Cow Urine to

A New Addiction in the market – Eating

Indian Govt. Postponed The Registration of E-Migrate For
prev next

Saudi expats can buy SUV in the Kingdom